Volkswagen Group has, for many years, been making some of the most powerful and expensive SUVs in the world. This drag race from Carwow is a 2020 check of which is the fastest between the Lamborghini Urus, Bentley Bentayga, Porsche Cayenne Turbo S, and the new Audi RS Q8.

As strange as it might seem, these four are both arch enemies and close friends. All are based on the same platform, and the V8 engine in three of them was co-developed.

But what makes each individual SUV special? We’ll start with the Audi RS Q8, since it feels like the newest model here. The first SUV ever to wear an RS badge, it boasts the famous 4.0 TFSI engine, making 591 horsepower.

We have seen the new RS6 Avant, which is lighter and has the same engine, lose to a Lamborghini Urus recently. So we’re not going to blindly believe Audi’s claimed performance, especially when the Italians have done a better job in the tuning department. The Urus may have the same twin-turbo V8, but it’s got 50 more horsepower, so it should win here as well.

The Porsche Cayenne Turbo S is just as new as the Audi, but hasn’t been getting that much attention. The powertrain is the same as in the Panamera model, a plug-in hybrid drive that produces 680 hp and 626 lb-ft (850 Nm) of torque.

And finally, we have the Bentayga. It’s not the flagship Speed model, so it only makes about 600 hp from a W12 twin-turbo V8. That body kit makes it look expensive but might slow it down in the drag race.

So what happens in the drag race? Well, the RS Q8 just gets a participation medal, which is strange considering Audi had more time to develop its car than everybody else. Also, that Cayenne must have drag racing chats on, and guest driver Yianni thinks Lamborghinis are the coolest. He’s not wrong, though. 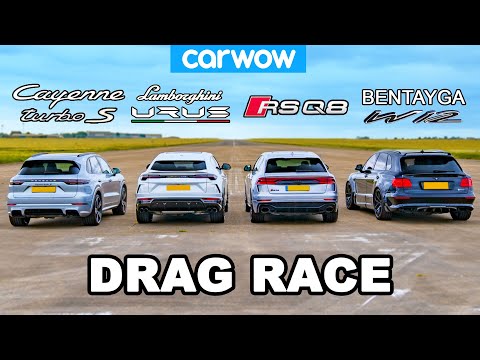