I wouldn’t have predicted I’d be giving my first impressions of iOS 14 on the first day of the public beta. My previous policy on iOS and macOS betas could be succinctly yet comprehensively summarized in a single word: no.

Where macOS is concerned, that remains my policy. My Mac contains my life. Photos, novels, screenplays, blogs, plans, you name it. And because I live a paperless life, it has scans of everything from boring stuff like bills to sentimental things like cards and letters. Of course, I have multiple backups, but those are for use when something has gone wrong; I don’t want to willfully encourage that to happen.

I have, though, become more relaxed where my iPhone and iPad are concerned…

Anything important on those lives in the cloud or is mirrored on my Mac. Restoring an iOS device from backup doesn’t scare me the way having to restore a Mac does. Absolute worst case, I could set one up from scratch without too much stress.

So with iOS 13, I tried the beta on interesting dot releases. However, iOS 14 and iPadOS 14 are such huge deals that I couldn’t wait to try those.

I still didn’t go as far as trying the developer betas. While problems with my iOS devices wouldn’t be a major problem, issues like very high battery drain would still be inconvenient. The first public beta strikes me as a reasonable compromise between early access and risk.

One of the most visible changes with iOS 14 is, of course, widgets on the Home screen. This is something I’ve been calling for now for more than six years!

So if checking live data is the primary usage, and using apps secondary, shouldn’t that be reflected in how the OS works? Shouldn’t displaying live data be the initial view, swiping that away to access our apps?

There aren’t many widgets available yet. I started with three: calendar, weather, and Siri Suggestions. 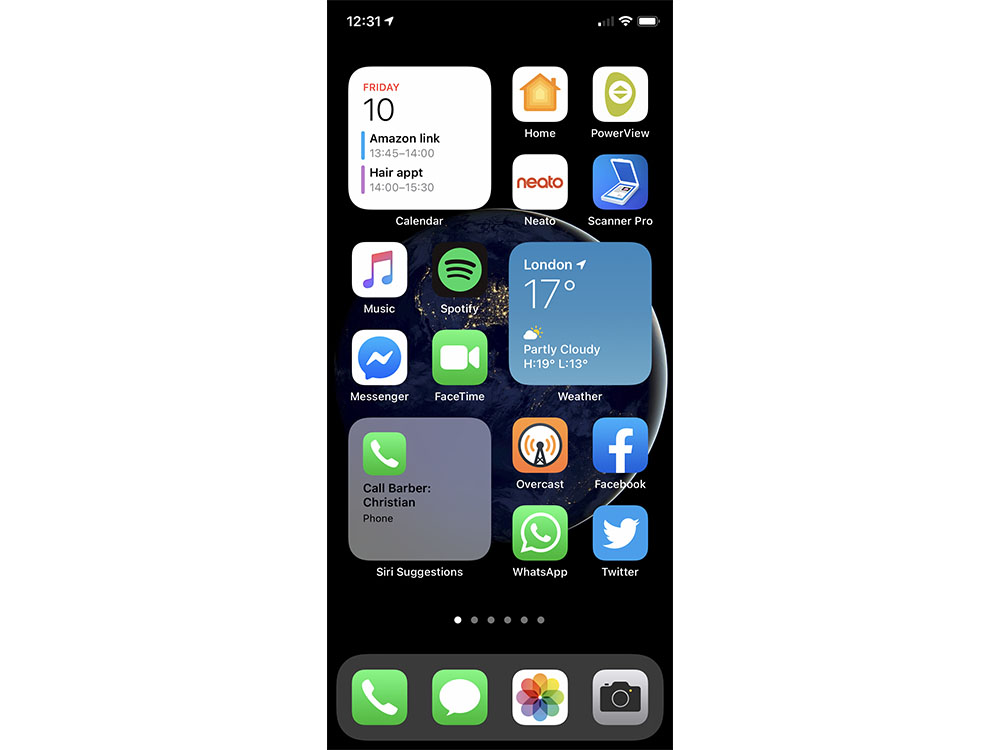 This immediately revealed a bug: that suggestion to call my barber was for something in my calendar two days ago. Since then, I’d not only called him but had the haircut. (Managing to get a haircut appointment is what passes for excitement during a pandemic — I managed one on Tuesday, my girlfriend on Friday.)

The next Siri suggestion was a totally random one: that I might want to call an individual I have perhaps called three times in my entire life. Clearly this one needs some work.

Even the smallest widget size uses up the space of four apps, so having three widgets resulted in 12 of my Home screen apps being relegated to a new screen 2. 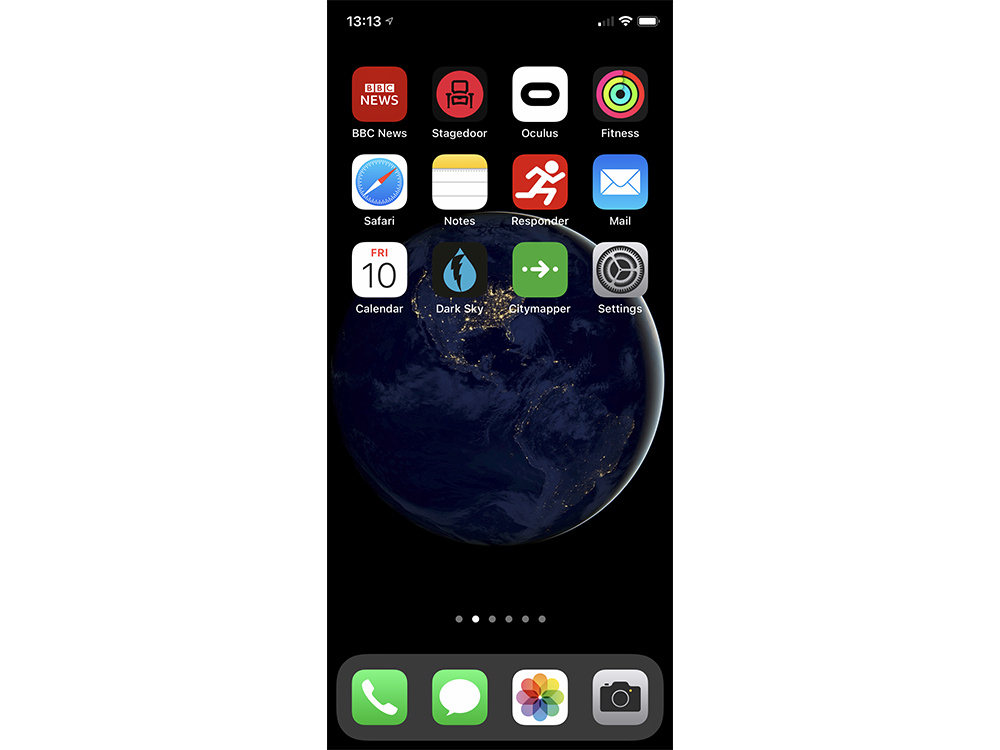 My apps were very carefully organized by screen, so I’d now have to rethink how I did this. One thought immediately occurred: why not have my entire Home screen be widgets? Then my phone would open to live data, and my original Home screen would be just a swipe away. I decided to give that a try. This revealed a second issue. 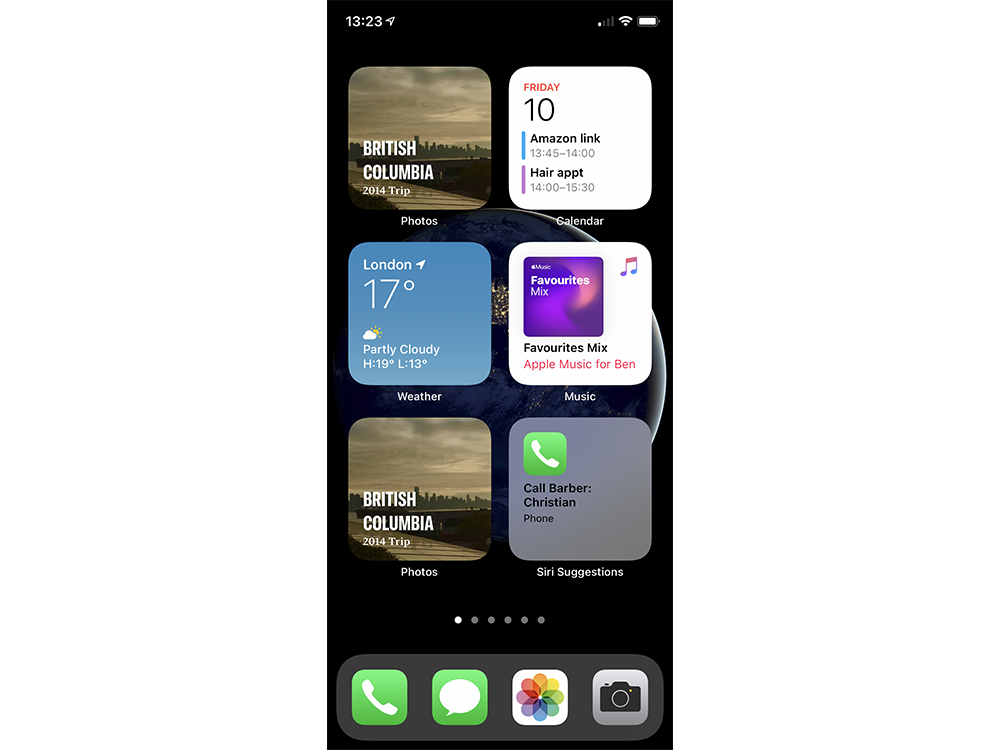 The reason Photos appears twice is that the bottom-left widget is a Smart Stack, and iOS 14 decided to display this even though it already appears elsewhere on the screen. Like Siri Suggestions, Smart Stack could also benefit from being, well, smart.

Oh, and the Photos widget is buggy too. It started by surfacing a 2014 trip to Vancouver, which was a very enjoyable memory, but the next album it highlighted was called London 10 May 2020. When I tapped on it: 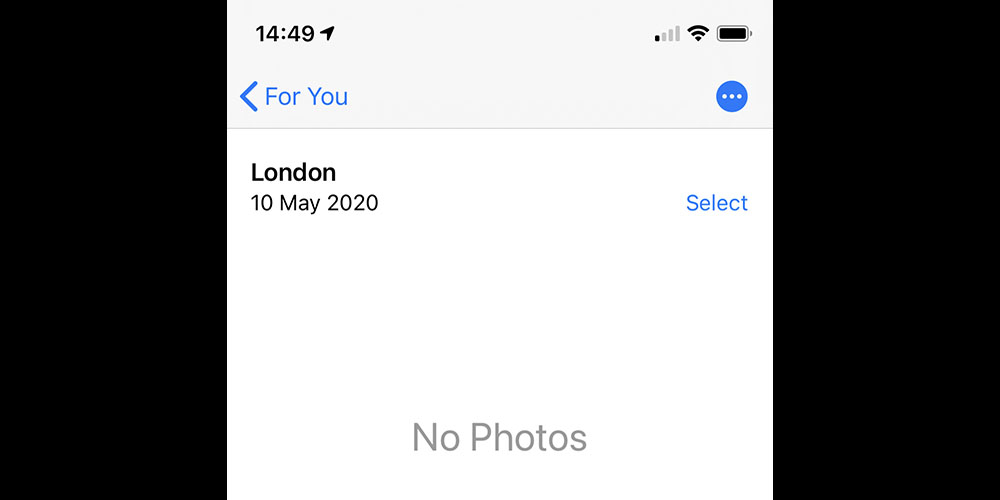 It did later populate with that with what turned out to be one of a series of early-morning cycle rides through lockdown London.

Oh, and it’s annoying that you get a choice of three sizes of widgets, but cannot resize them once selected: You have to delete and then re-add the widget in your preferred size.

Perhaps it’s just the novelty of it, but I do kind of like the idea of an all-widget home screen. I didn’t make much use of widget screen in earlier versions of iOS, in part because it was “out of sight, out of mind,” and in part because the whole point of widgets is at-a-glance info: If I have to swipe to see one, I might as well just tap on the app instead.

However, as much as this idea is interesting to me, the reality is that there just aren’t enough widgets available yet, so I’ll likely end up with a mix of widgets and apps for now.

Next, I tried message pinning. This makes it much easier to find your most frequently used chats. Although Messages already places the most recent ones at the top, it’s pretty easy for your main chats to get buried if you receive a lot of texts. You can have more than one row of pinned chats, but I decided to start with three, to keep things to a single row. 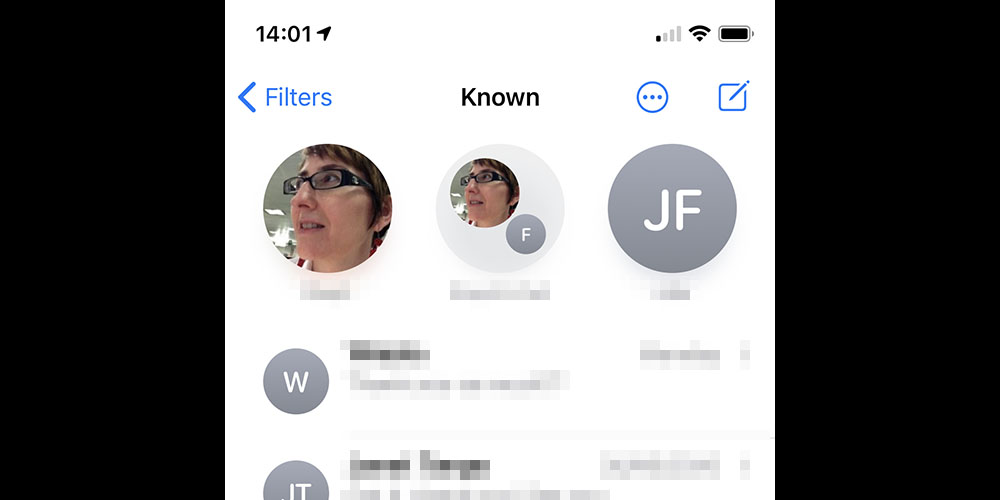 The Music app gets quite a notable refresh in iOS 14. 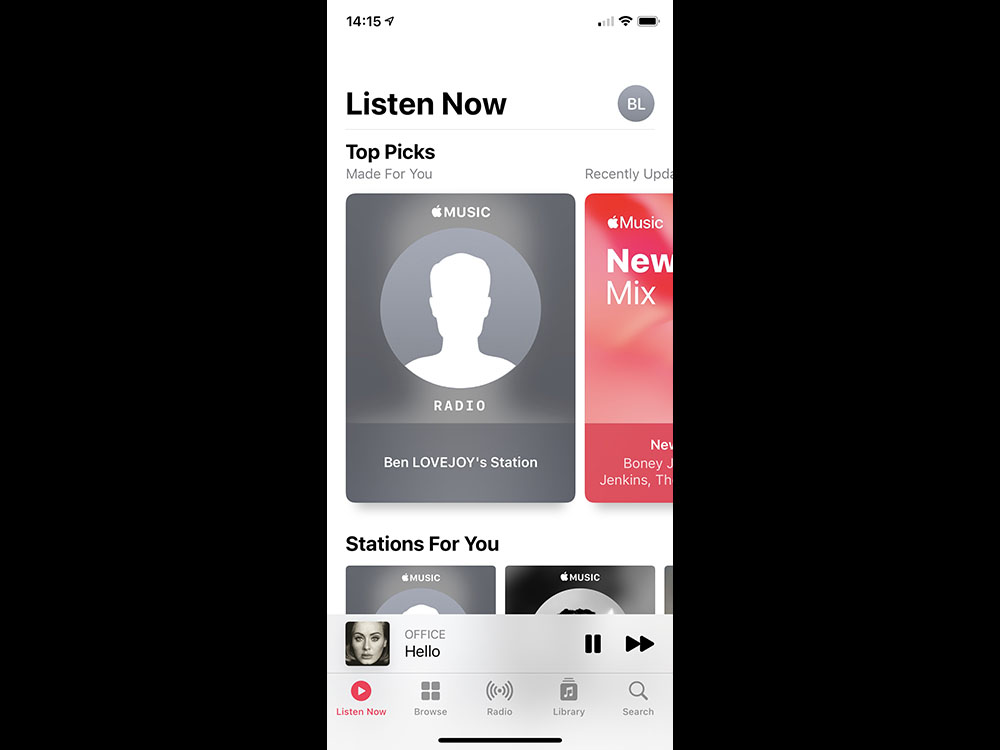 I’m not a fan of the For You tab being renamed Listen Now — the former name seems to me a more descriptive one — but I do like the new content.

The first thing you see now is your personal radio station. This does exist in iOS 13, but is rather hidden. I at first thought this had replaced Favorites, but that still exists further down. I haven’t had a chance to listen to it enough to see how it differs from Favorites, and like other radio stations, you can’t tap on them to open them and see the contents. I’ll report back on that later.

The New Music Mix is still next, along with Chill and — for me, at least — a new Romantic playlist. I may be giving away too much about my musical tastes here …

Stations For You mostly made sense, though there was one rather random artist I hardly listen to — but I’ll check out the station anyway.

One oddity is that the Made For You repeats both the New Music and Chill playlists. I guess it keeps them all together, so perhaps duplication is the lesser evil here.

It’s always hard to remember a previous UI for a direct comparison, and my girlfriend doesn’t use Apple Music so I couldn’t check against her phone, but my overall impression is that it’s more visually pleasing and surfaces more content. 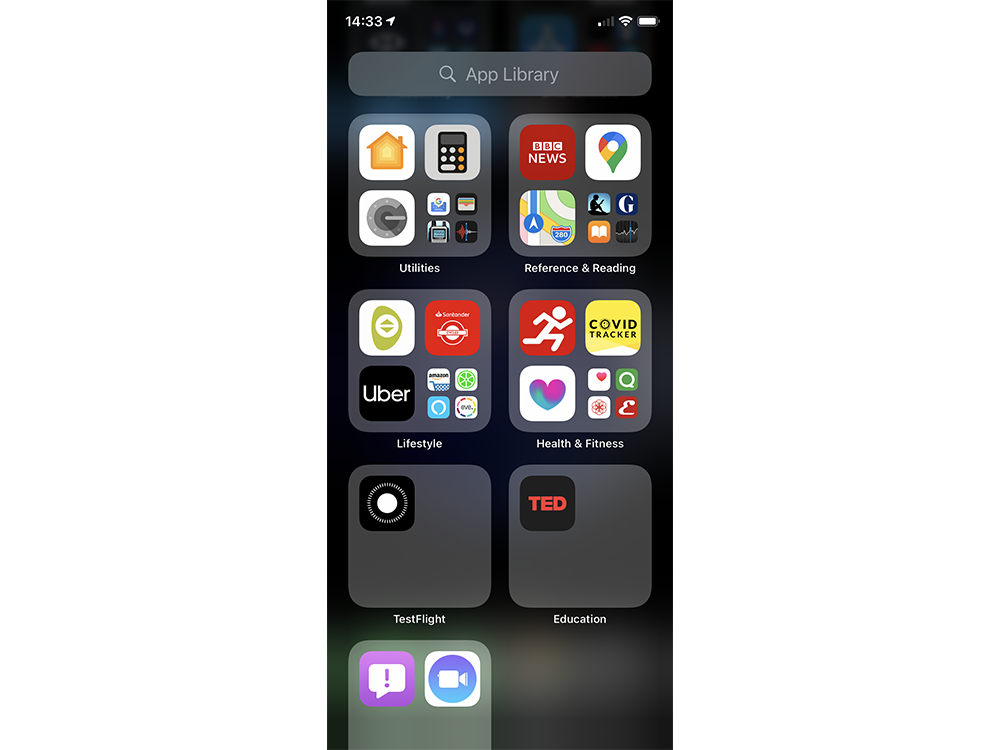 I like the idea of this, but I’m not sold on Apple’s categories. For example, a category that mixes in BBC News, Apple Maps, and Kindle? Ok, I guess the “Reference and Reading” label fits them, and it does at least include the Guardian app and Books in the same folder, so my news and ebook apps are together, but it’s a bit of a random grouping overall.

Similarly, Lifestyle. This mixes Powerview and Eve, two smart home apps used only at home (and indeed rarely used at all since I usually use Siri or the Home app), with Santander, Lime, and Uber — three apps used only when out. Amazon and Alexa also end up in there. This one is as random as could be.

Utilities and Health make sense, but then we have two folders with only one app each.

However, for me App Library is entirely redeemed with a feature we first revealed back in March: a single tap in the search bar gives you an alphabetic list of all your apps. 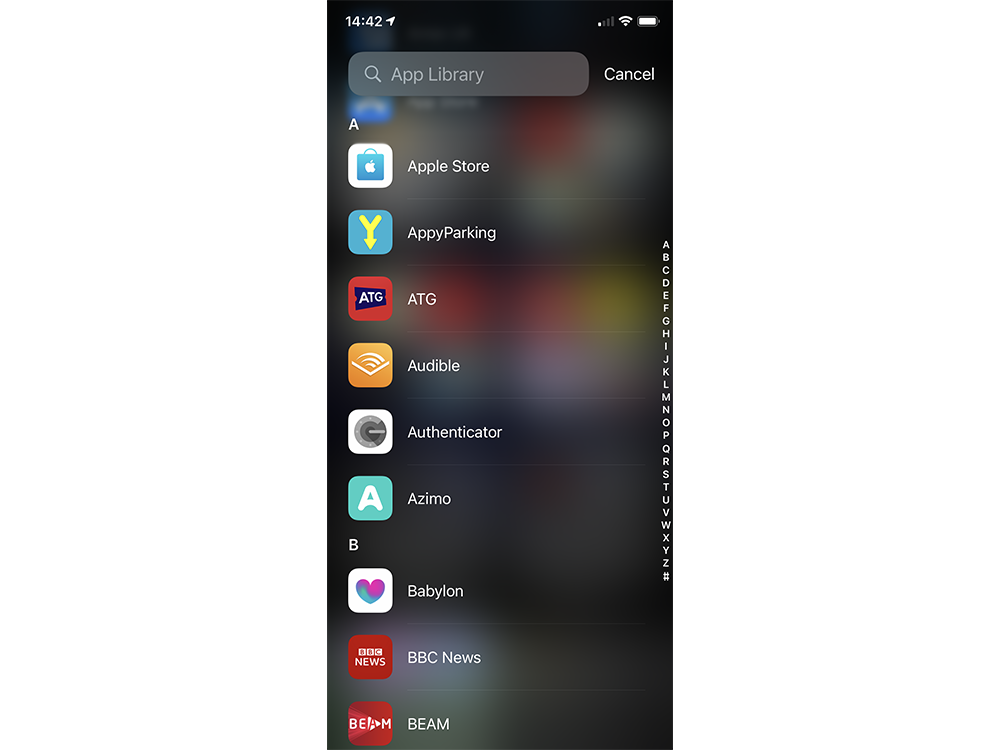 For me, there are two benefits to this. First, there are times when I know I have an app to do something I do very infrequently, but it’s been so long since I last used it that I can’t remember what it’s called. This is mostly an issue with companion apps for hardware I’ve tested, where the app name differs from the product name. The scroll list shows the icons as well as the names, and I’m likely to recognize it by quickly scrolling through the list.

Second, I like to do periodic clearance of unused apps, just to keep things tidy, and a single scrolling list of all installed apps is a very easy way to do that. For example, I could see immediately that I still have a parking app still installed despite the fact that I no longer own or need a car.

My first impressions of iOS 14 are good. You have to give the bugs a pass in a beta, and I’m sure those will be worked out.

The Home screen feels far fresher with widgets, and once there are more of them available, I think this will make a huge difference to usability.

The revamped Music app looks great, and surfaces a lot of tailored music suggestions that were previously either absent or well-hidden.

I’ll play with iOS 14 more over the weekend, but what I’m really looking forward to trying is iPadOS 14 on my iPad. Watch this space.